Does the Car Inverter Damage the Car?

As people spend more and more time in the car, the requirements for automotive electrical appliances also increase. Therefore, the ordinary 12V power supply is basically unable to meet the demand. At this time, the 12V DC on the vehicle can be converted into 220V AC through the car inverter, so that the car power inverter can play a greater role. But is it really safe to use a car inverter?

The correct use of the on-board inverter is not harmful to the car. The vehicle has two power supply methods, one is the battery and the other is the generator. The car starts the engine with the power of the battery, and the motor starts to generate electricity after the engine rotates. Part of the generated electrical energy is used for the engine (mainly the spark plug) to work, and the excess electrical energy is stored in the battery. When the battery is full, the extra power is wasted. If only the battery is used to supply power to the car power inverter, it will cause the battery to quickly reach a depleted state. If the engine is started to drive the generator to generate electricity, then the use of the car inverter will not cause any adverse damage. 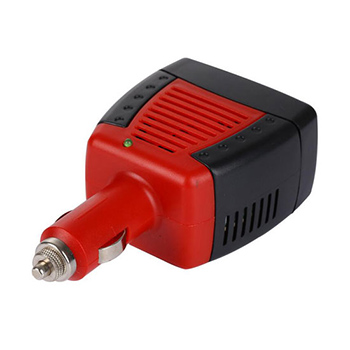 If you want to use the car inverter to power on-board electrical appliances after the vehicle is parked, start the engine as much as possible. Otherwise, the car battery will be depleted, which will cause damage to the car battery.

The working state of the car inverter is mainly divided into two situations, one is the state of starting the engine, and the other is the state of turning off the engine. In the starting state, the inverter basically uses excess power, which has no effect on the car at this time. However, in the stopped state, the battery is used to reserve power, which is easy to cause the battery to lose power and reduce its lifespan. It should be noted that the battery is always in a state of charge-consumption-charge-consumption. It doesn't hurt that the car inverter consumes a little power.

However, if the power consumption time is too long, the engine should be started in neutral gear for 10-20 minutes to generate electricity to prevent the battery from running out. Most vehicle cigarette lighters are connected to fuses with a maximum current rating of less than 20A. That is to say, the maximum power is 230W, and the fuse will be burned if the maximum power is exceeded. This will also cause damage to the car's electrical system. Therefore, when using electronic equipment, you need to pay attention to the power. It is generally recommended to choose about 150W, preferably not more than 200W.

The car inverter will generate a lot of heat during use, and the ventilation of the fan is mainly maintained at this time. If the temperature is too high, it will cause the car inverter to overheat and burn. This will also affect the circuit system of the vehicle, and even cause the vehicle to catch fire, which is very dangerous. It is best to unplug the car inverter after the vehicle is turned off. Because the cigarette lighter will not power off. Long-term operation of the cigarette lighter may also consume the battery power, causing the vehicle to lose power and not be able to start. It is recommended not to turn on the air conditioner after the flame is turned off, it consumes a lot of power. The air conditioner can drain the battery in a few minutes. There are other electrical appliances that should be used as little as possible after they are turned off. The battery is in a state of depletion and its lifespan will be reduced.

If you just plug the car inverter into the cigarette lighter without connecting other electrical appliances, the battery is equivalent to no load. If a 65W laptop is plugged into the car, the battery is loaded. If the efficiency of the car inverter is 90%, it is equivalent to providing 72W of electricity from the battery. The life of the battery is related to the number of charges and discharges. The maximum number of times the electrical appliance is plugged in is to increase the number of times the battery is charged and discharged. Plugging in appliances definitely has an effect on the life of the battery, but it won't be huge. But for appliances with less power, its effect on the battery should be similar to the effect of turning on the radio on the battery. A good battery will be more durable and can withstand the toss of this load relatively speaking. There are batteries specially designed for the frequent use of electronic equipment in the car, which will cause less damage to the battery and the car.