How Does Wind Turbine Work?

People have used the power of wind for thousands of years. Wind has moved boats along the Nile River, pumped water and milled grain, supported food production and much more. Today, the kinetic energy and power of natural air flows called wind are harnessed at massive scale to create electricity. A single, modern-day offshore wind turbine can generate more than 8 megawatts of energy, enough to cleanly power nearly six homes for a year. Onshore wind farms generate hundreds of megawatts, making wind energy one of the most cost-effective, clean and readily available energy sources on the planet.

How is Wind Makes?

Differences in temperature create wind energy. The sun's solar energy warms the Earth, but it does so unevenly. Mountains, lakes, and other geographical features also help create areas of high and low pressure, as does the Earth's rotation. The position of the sun and the angle it strikes the Earth also contribute to this. For example, we know the midday sun exudes more warmth than at sunrise or sunset. 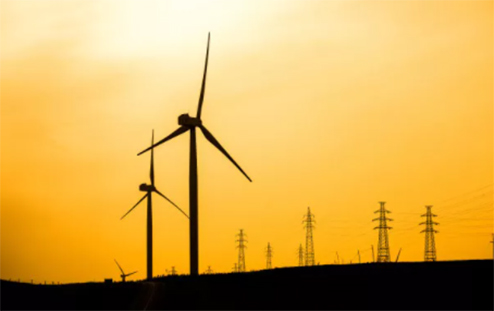 A wind turbine is like the air intake of a jet engine. When air enters, it first encounters a fixed set of blades called stators. It directs air into a set of rotating blades called rotors. Air pushes the rotor and emerges on the other side, moving more slowly than it does outside the wind turbine. The shield is shaped so that it directs the relatively fast moving air on the outside into the area behind the rotor.

Power is generated through rotating wind turbines that harness the kinetic energy of moving air, which is converted into electricity. The basic idea is that wind turbines use blades to collect wind’s potential and kinetic energy. Wind turns the blades, which spins a rotor that is connected to a generator to create electric energy.

What is Wind Power?

Wind power, or wind energy, is the process by which power is obtained from harnessing wind. This power is used to grind grain, pump water, and generate electricity as well as support activities like transportation (sailing), and water sports like wind surfing.

While wind sometimes doesn't blow, other renewable energy sources such as solar, hydro, geothermal, and biomass can complement wind energy. Ocean and tidal energy is an important possibility, but it's still in the formative stages. For now, grids balance the demand with nuclear, coal, and natural gas-powered power stations.

Wind energy has been harnessed by humans for centuries, beginning as a god to some and later becoming a helping hand to build strong civilizations, grind grains, and power boats across oceans. Now, in the face of global warming and climate change, wind power is helping us once again to discover more about how we can have a symbiotic relationship with the planet.