The wind is a renewable energy source caused by uneven heating on the earth's surfaces by the sun. Wind power refers to converting the kinetic energy of wind into electricity. It is a kind of clean and pollution-free renewable energy, has been used by people in the early time, mainly through the windmill to pump water, grinding surface and so on. Using wind power to generate electricity is environmentally friendly, and the wind energy accumulation is huge.

Wind turbines, like windmills, are mounted on a tower to capture the most energy. At 100 feet (30 meters) or more aboveground, they can take advantage of the faster and less turbulent wind. Turbines catch the wind's energy with their propeller-like blades. Usually, two or three blades are mounted on a shaft to form a rotor.

A blade acts much like an airplane wing. When the wind blows, a pocket of low-pressure air forms on the downwind side of the blade. The low-pressure air pocket then pulls the blade toward it, causing the rotor to turn. This is called lift. The force of the lift is actually much stronger than the wind's force against the front side of the blade, which is called drag. The combination of lift and drag causes the rotor to spin like a propeller, and the turning shaft spins a generator to make electricity. 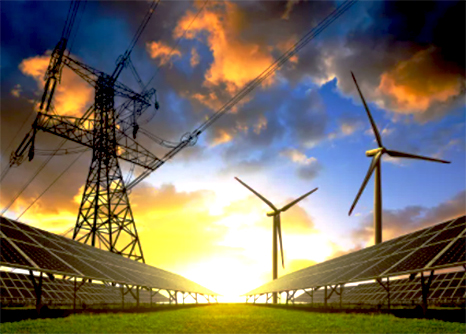 Wind turbines can be used as stand-alone applications, or they can be connected to a utility power grid or even combined with a photovoltaic (solar cell) system. For utility-scale (megawatt-sized) sources of wind energy, a large number of wind turbines are usually built close together to form a wind plant, also referred to as a wind farm. Several electricity providers today use wind plants to supply power to their customers.

Stand-alone wind turbines are typically used for water pumping or communications. However, homeowners, farmers, and ranchers in windy areas can also use wind turbines as a way to cut their electric bills.

Small wind systems also have potential as distributed energy resources. Distributed energy resources refer to a variety of small, modular power-generating technologies that can be combined to improve the operation of the electricity delivery system. Distributed wind energy systems are commonly installed on, but are not limited to, residential, agricultural, commercial, industrial, and community sites, and can range in size from a 5 kilowatt turbine at a home to a multi-megawatt (MW) turbine at a manufacturing facility. Distributed wind systems are connected on the customer side of the meter to meet the onsite load or directly to distribution or micro grids to support grid operations or offset large loads nearby. Distributed wind systems are defined by technology application, not technology size, and are typically smaller than 20 MW.

Wind power is the fastest growing green energy technology in the world. With the rapid development of land wind farm construction, people have noticed some limitations of land wind energy utilization, such as large area, noise pollution and other problems. Due to the abundance of offshore wind resources and the availability of today's technology, the ocean will become a rapidly growing wind market. Land wind generators are more optimized for noise reduction, offshore is optimized to maximize aerodynamic efficiency. The high tip velocity and small blade area will bring some beneficial design changes to the fan structure and driveline system.