Windmill is one of the earliest and most efficient forms of man-made electricity. It uses wind power to generate electricity and uses it for many functions such as pumping water, sawing wood,grinding grain, etc. The blades of the windmill are well engineered to make the most of the wind. It converts wind energy into mechanical energy and uses it for many tasks that are previously mentioned. The blades of a windmill are also called wind vanes or sails. Windmills have been around since humans existed on earth. At present, windmills are still used for farm pumping and other farm needs.

A wind turbine is a mechanical device that uses the kinetic energy of the wind to generate electricity, mainly for commercial use. Wind turbine technology is one of the most reliable and cost-effective technologies for generating large amounts of electricity. It is a clean energy source that uses wind power without producing harmful gases. And it is widely used for power generation in household and commercial areas. 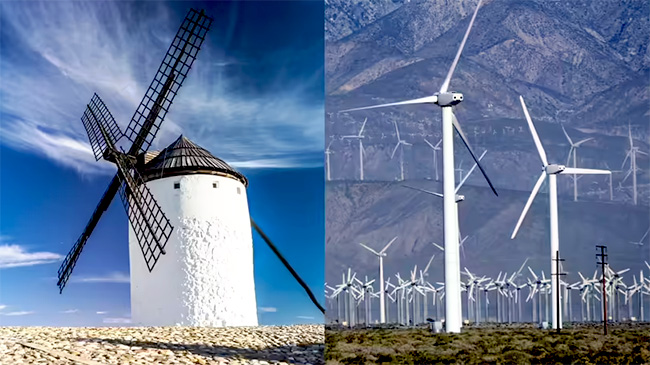 The principle of wind power generation: it is to use the wind to drive the rotation of the windmill blade, and then through the speed increase machine will increase the rotation speed, to promote the generator to produce electricity. With windmill technology, the breeze can start generating electricity. Wind power is creating a general boom in the world because it has no fuel problems, radiation or air pollution. It's very popular in countries like Finland and Denmark. It is generally believed that the power of wind power is entirely determined by the power of wind turbines, and people always want to buy a bigger wind turbine, which is not true. The wind turbine simply charges the battery, which stores the electricity, and the amount of power people end up using is more closely related to the battery size.

Most wind turbines consist of three blades mounted on a steel tube tower. There are also less common double-bladed towers, or concrete or steel trellises. Turbines capture the energy of the wind using propeller-like blades that act much like the wings of an airplane. When the wind blows, a mass of low-pressure air forms on one side of the blades. The low-pressure cavitation then pulls the blades towards it, causing the rotor to rotate. This is called lift. The lift force is much greater than the force of wind on the front of the blade, which is called drag. The combination of lift and drag causes the rotor to spin like a propeller.

Windmills convert the energy of the wind into rotational energy, which is mainly used to pump water. However, they are used commercially to generate electricity. They work efficiently in the harshest environmental conditions and extreme temperatures. Windmills are used for everything from pumping water to crushing to crushing rock and agricultural materials. Wind turbines are used commercially to provide electricity for homes, schools or businesses. Even local governments and municipalities benefit from commercial scale wind power.

Although windmills and wind turbines both use wind power to generate electricity, their functions and capabilities are different. Windmills can be used in sectors that require a small amount of electricity without much investment. However, when it comes to making the most of wind energy and using it for home and commercial purposes, it pays to choose and invest in wind turbines.