Our goal when thinking of installing solar photovoltaic system is to achieve higher financial saving, so actually increasing numbers and power capacities of used solar panels is not a goal, it just may be one of ways to achieve substantial financial saving, and may not, that is based on the design.

There are 3 external factors that affect how much electricity we can harvest from our solar photovoltaic system, so strong attention should be paid to them in designing stage, and those factors are as following:

It means in what direction the solar panels power inverter have to face, is it north, south, east or west? Actually, these directions are affecting peak electrical power that solar photovoltaic system generates over the day time "morning-noon-afternoon-late afternoon". One of those direction will generate peak power at noon time, other direction will generate peak power at morning time and so on. Each location/country has its own recommendations regarding the best orientation for getting the max electricity generation from the solar system over the day. 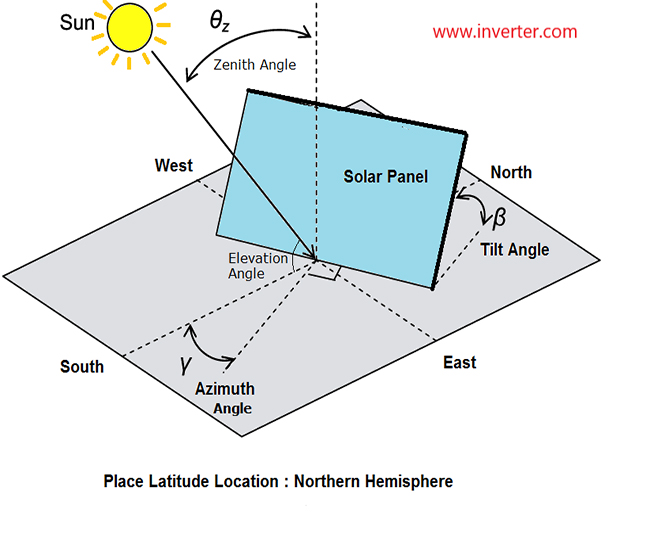 It means solar panels angle from horizontal. Actually, this angle affects peak electrical power the solar photovoltaic system generates over the time of the whole year. In other word, it will affect when will be the large generation peak, is it in summer or winter, which months? As based on this angle, in certain season/ months, much amount of sun will hit the solar panels power inverter more than other season/ months. The pitch angle value is related to the area/country latitude, so each country has its best pitch angle. And generally, in summer, the electricity generation is higher than winter due to longer day and clear sky. Anyway, what we care about is to select the best pitch angle to get max electricity generation over the year.

The shadow is a big issue; it reduces electricity generation dramatically. The shadow will appear more in winter because the sun will be lower in the sky. Shadow happened due to external opaque element or due to dirt build on the solar panels surface. There are 2 solutions that can assist us to overcome this issue; reducing pitch angle will increase self-cleaning via rains, and using micro inverter.

One of the most external factors affecting solar photovoltaic performance rather than the 3 factors aforementioned, is how much solar irradiation exists in that country/location. There will be many calculators available on internet free of charge that provide us with accurate sun irradiation data for each place in the world. This calculator estimates the output power from the solar photovoltaic system based on optimal criteria, means best orientation, best pitch angel, no shadow, and standard good quality solar panels.