Both technologies use panels to gather sun energy, the solar hot water panels have black copper pipes going though them and filled with water, while solar photovoltaic panel power inverters have silicon solar cells connected to each other in series. For both technologies, we practically using multiple panels to achieve required  output (hot water amount or electrical power).

Up to approx the year of 2003, only thermal solar system was readily available in the market, and it was achieving good saving, but it was having some shortcomings. In winter, it rarely produces enough hot water required, so households were using gas heater or electrical heater to stand behind and substitute for this shortage but in contrast in summer, the solar thermal system was providing much more hot water than needed.

Then, in the last 15 years, solar photovoltaic system has taken off, and become readily exist in the market in different power sizes. The big advantage of such technology is that we get electricity that can be used to power all kind of load, washing machines, lights, electronics, and even water heaters, so you no longer need to install thermal solar system when installing solar photovoltaic system with a proper power capacity. Moreover, todays the need of hot water is declining because of the appearance of household appliances include heater inside, like dish washer, washing machine, showers. So, conventional solar hot water system no longer become economical feasible solution.

Practically, achieving high electricity bill saving can be reached via installing large solar photovoltaic system which can handle all household’s equipment including electric heater or heat pump and no need to pay more money for installing such dedicated solar thermal system equipment.

In solar photovoltaic system, when the sun lights hit the solar panel power inverter surface, an electric direct current is generated and flow over the electrical wirescables. Then it will be sent to the inverter, which will convert the dc voltage to ac voltage, which can be used for all our appliances/equipment. So, it’s not complicated system, its simple and profitable project on all scales. 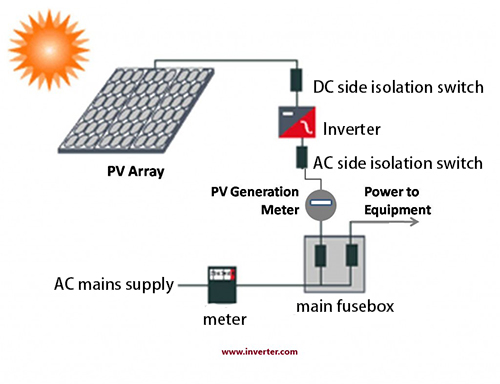