What is the String Solar Inverter?

What is the String Solar Inverter?

String solar inverter is advice that converts DC solar electricity generated form solar panels to AC electricity which we can use to operate all our electrical appliances and machines.

In string solar inverter, there will be a number of solar panels connected to each other in series, usually a number 6-10 solar panel, and generating what we called string. This string positive and negative terminals “DC” will be connected to the string inverter input side. As the panels will be connected in series, the overall string DC voltage will be high (typically 200-850V) and the circulating current will be low (equal to one solar panel rated current).

In large power capacity solar system, we shall see many string solar inverters and of course their numbers equal to the number and strings in the solar array system. 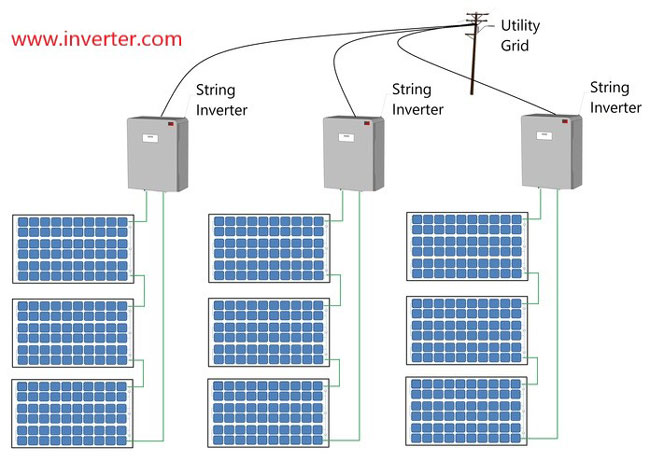 What are the advantages of string solar inverter?

As solar panels connected in series rather than in parallel, the voltage will be high and the current will be low as aforementioned, so wire gauge between solar array and string inverter will be lower and power losses will be lower as well. In addition, the higher DC voltage inputs to the inverter will lower its internal losses and improve the efficiency of its electronic components.

As the large solar system includes multiple string solar inverters, then the failure of one string inverter will not affect the operation and the yield received from other inverters, so the reliability of the overall solar system will be higher.

What are the disadvantages of string solar inverter?

The main disadvantage is that the solar panels are still connected in series, so shaded or failed solar panel will affect the yield of the whole string. Suppose we have a string of 10 solar panels and the current of each panel is 8A, then the string current will be the same (8A), and if one solar panel is fully shaded or failed, this will result in high impedance imposed in DC current path and will stop current flow, so the whole string will not output power or output very low amount of power.