The PV module capacity and solar inverter capacity ratio are commonly referred to as capacity ratio. Reasonable capacity ratio design needs to be considered comprehensively in the light of the specific project. The main influencing factors include irradiance, system loss, inverter efficiency, inverter life, inverter voltage range, assembly installation angle and so on. Because the inverter accounts for only about 5% of the system cost, the number or power of the inverter is reduced by the overmatching of the components in the distributed photovoltaic power station system, and the investment income is very small, which also bring other problems, the specific analysis is as follows.

Different irradiance in the different regions

According to the standard of wind energy and solar energy evaluation center of National Meteorological Administration, the solar energy resources in China are divided into four categories, and the irradiance of different regions is quite different. Even the annual radiation levels vary greatly from place to place in the same resource area. For example, the total annual radiation of the Gaer Tibet and Golmud, Qinghai, the resource area of Class I, Gaer is 7998 MJ/m2, which is 17% higher than Golmud's 6815 MJ/m2. It means that under the same system configuration, that is, the same capacity ratio, the power generation in the Gaer region is 17% higher than that in Golmud. In order to achieve the same power generation, it can be achieved by changing the ratio of capacity to distribution.

There is a loss in every link of energy from solar radiation to photovoltaic modules, through DC cables, confluence boxes, DC distribution to solar inverters in photovoltaic system. As shown in the figure, the DC side loss is usually about 7-11%, the inverter loss is about 1-2%, and the total loss is about 8-13%. (the system loss mentioned here does not include the transformer and line loss behind the inverter). 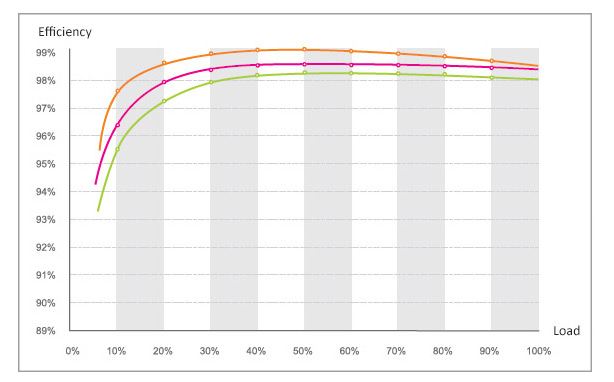 According to all kinds of factors, the power of the system is between 40 and 60% of the rated power of the solar inverter, the efficiency is the highest and the life is the longest. In order to optimize the performance of the inverter, the components and inverter have different proportions depending on the lighting conditions.