The off-grid photovoltaic power generation system for household use consists of the photovoltaic module, supporter, controller, solar inverter, accumulator and power distribution system. The system's electric plan design should take the selection and computing of modules, inverters (controllers), and accumulators into consideration. Before the plan design, necessary preparation should be made, because the off-grid is customized without a unified plan. Therefore, the user load type and power, electricity consumption in the daytime and in the evening, and climate conditions of the installation place should be first learned. The power supply for the off-grid photovoltaic system relies on the weather, which is not 100% reliable.

The off-grid solar system must be equipped with the accumulator, which takes up 30% to 50% of the power generation system costs. Meanwhile, the general service life of the lead-acid accumulator ranges from 3 years to 5 years. After the expiration of its service life, an exchange is necessary. From the economical point of view, the accumulator can hardly find wide applications on an extensive scale, and it is only applicable to places suffering from shortage of power supply.

The off-grid system is different from the grid-connected system. Components and inverters are not configured in a certain proportion, but are designed according to the user's load, electricity consumption and local weather conditions:

1. Confirm the off-grid inverter's power according to the user's load type and power

Generally, the load for home use can be divided into inductive load and resistive load. The load with the motor, such as the washing machine, air-conditioner, refrigerator, water pump and smoke exhaust ventilator is the inductive load. The motor start-up power is three to five holds as much as that of the rated power. In computing the inverter's power, it is necessary to take the start-up power of the load into consideration. The output power of the off grid inverter is higher than the load power. However, to impoverished families, it is impossible to start all loads. Therefore, in order to save costs, the sum of the load power can be multiplied by the coefficient, ranging from 0.7 to 0.9. Below is a list of the power of electric devices for household use, which is for reference upon design.

2. Identify the module power according to user's daily electricity consumption

Electricity available for the off grid system = Total power of modules * Average hours of solar power consumption * Efficiency of controller * Efficiency of accumulator. In principle, the module should be designed to satisfy the daily electricity consumption of the load under the general weather conditions. In other words, the daily power generation of the solar cell module should be larger than the load's daily electricity consumption. Since the weather conditions are either lower or higher than the average, the solar cell module design should basically satisfy the need of the season with the poorest illumination. In other words, the accumulator should be ensured to be fully charged in the season with the poorest illumination. However, the seasonal poorest illumination in some places is far lower than the annual average. If the power of the solar cell module is still designed according to the poorest conditions, then the annual power generation might far exceed the actual demand, thus causing huge waste. Under the condition, the designed capacity of the accumulator should be properly increased to enlarge the electric energy storage and ensure the accumulator to be at a shallow discharge status, which can make up the shortage of power generation in the season with the poorest illumination, and prevent it from damaging the accumulator cell. The power generated the module cannot be fully converted into the power for use, because the controller efficiency, machine loss and accumulator loss should also be considered.

3. Confirm the accumulator capacity according to the user's night power use or expected stand-by time

The task of the accumulator is to ensure the system load's normal power use when the solar radiation is insufficient. The important load should ensure the system to function normally in several days, and the number of successive overcast and rainy days should be considered. In terms of general loads, such as the solar streetlamp, the accumulator capacity should be selected in two to three days according to experience or need. To impoverished families, the price is a major consideration. The accumulator is not needed on rainy and overcast days, and is used when there is ample sunlight. When the sunlight is insufficient or there is no sun, then the accumulator will not be used. In choosing the load, one should choose the energy-saving equipment, such as the LED light and variable-frequency air-conditioner. The accumulator designer includes the accumulator capacity design and the accumulator cell series-parallel connection combination. In the photovoltaic power generation system, the lead-acid accumulator is often used. Considering the life span of the battery, the depth of discharge is generally set to be 0.5 to 0.7. Designed capacity of the accumulator = (Average daily electricity use of the load * Number of successive overcast and rainy days) / Accumulator's depth of discharge.

4. Design plan for 4000 watt system for household use 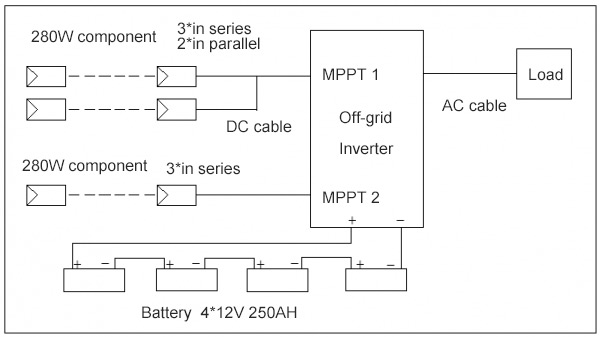 (1) Statistics of the total load power

(2) Statistics of daily electricity use

(3) Computing of the accumulator

The electric devices for home use are mostly used in the evening, leaving only 20% for the daytime. In order to increase the life span of the accumulator, the accumulator capacity can be properly increased, for the daily depth of discharge is low. This project adopts four sections of 12V 250AH colloid lead-acid accumulator, whose total capacity is 12,000 VAH. The utilizable electricity quantity is around 8.4 kWH, and the average electricity consumption at night is 6kWH. The depth of discharge is around 50%.