PV modules and inverters must be kept ventilated. Generally speaking, when the photovoltaic power station is designed, the bracket will usually be raised (except for household, industrial and commercial tile roof photovoltaic power stations), so as to ensure that there is enough space around the components, thus ensuring the circulation of air and achieving the purpose of cooling. In addition, the metal frame around the components also has a certain heat dissipation effect. 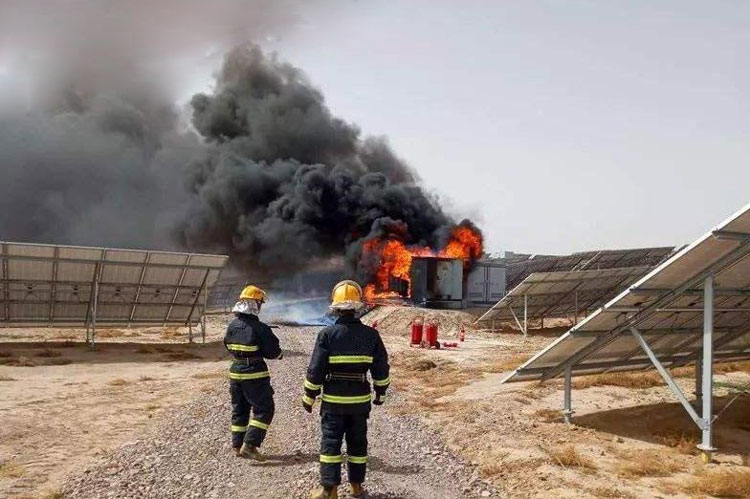 The inverter should be shaded. Most of the PV inverters on the present market are generally in the IP65 protection level, with a certain degree of wind, dust and water resistance. However, in the summer, the ambient temperature is high, and various components in the inverter are prone to high temperatures during operation, resulting in a decrease in power generation efficiency and even affecting the service life of the components. Therefore, the inverter in some photovoltaic systems is installed with a sunshade to reduce the temperature of the equipment. In addition, the installation environment of the inverter should be well shaded and ventilated to ensure the convection of the air and also increase the power generation capacity of the power station.

As to the distributed photovoltaic projects, especially the color steel tile projects, it is required to regularly detect the hot spots of the components. The detection should be made in the period with low environment and high radiation photography. It is recommended to test in the spring and autumn The thermal imager has a more significant color difference display, so as to find more hot spots.

Inspect and promptly remove the garbage generated during the construction period, especially the debris of the package and the flammable materials left by the employees, check the flammable foreign matter that is caught in the bottom of the module due to the air cyclone at the same time.

Can not only rely on the alarm of the data platform, and regularly organize the in-depth analysis and comparison of the string current, and promptly clarify the cause of the current difference. The square connector (MC plug) fails and breaks down the roof of the color steel tile, causing building fire. If it is feasible, not only the data of the platform should be read, but also the daily data comparison analysis should be formed to further ensure the safety of the power station.

Some distributed projects with DC combiner boxes should be conducted with the temperature measurement of the system before the high temperature season. The inspection should be made during the period when the power station operation load is high, so as to avoid the condition of finding no problem in low load but having abnormal temperature in high load.

Lay emphasis on checking the connector (MC plug) made during the installation phase of the site, check weather there are conditions of suppressed wire, irregular connection in construction, thus increasing the relieve resistance and causing heat. If the string inverter is used, the temperature at the connector should be checked.

In the end, it is required to establish a safety inspection system and use systematic management to reduce the probability of occurrence of photovoltaic fires.

Although almost all distributed photovoltaic power stations would buy commercial insurance, because distributed photovoltaic power plants are generally built on the user's roof, once the user's major direct and indirect economic losses are caused, the reconstruction of the power station and the subsequent collection of electricity charges will bring great troubles to the stations, these losses are far greater than the benefits caused by the annual increase in power generation. Professional operation and maintenance management brings not only the guarantee of power generation revenue, but also the key to the reduction of security risks and the sharing of risks.