How to Ensure the Safe Operation of Wind Turbines?

In the early 1970s, due to the problem of energy shortage because of the oil crisis, people realized the instability and limitation of conventional fossil energy supply. So people began to seek clean and renewable energy. As a renewable and pollution-free natural energy, wind energy has attracted people's attention.

In long-term practice, we found that due to design problems, ordinary wind turbines are prone to have some accidents when the wind speed is high. In order to ensure the safe operation of wind turbines, the original design needs to be improved.

The principle of the wind turbine is also relatively simple. The generator uses the wind to drive the blades of the windmill to rotate, and then the speed of rotation is increased through the speed-increasing machine to promote the generator to generate electricity. According to current windmill technology, a speed of about three meters per second can start generating electricity. 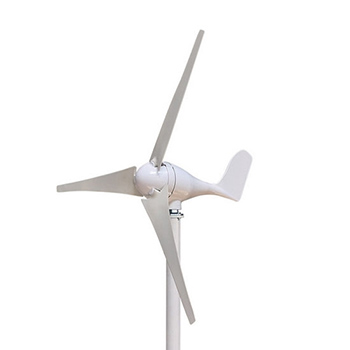 A wind turbine consists of a nose, a swivel, a tail, and blades. Every part is important. The function of each part is that the blades are used to receive wind power and convert it into electrical energy through the nose. The empennage keeps the blades facing the direction of the incoming wind to obtain maximum wind energy. The swivel can make the nose turn flexibly to realize the function of adjusting the direction of the tail. The rotor of the machine head is a permanent magnet, and the stator windings cut the magnetic lines of force to generate electricity.

The blade angle of ordinary wind turbines is fixed. When the wind wheel is strong, the wind wheel will rotate rapidly, resulting in bad phenomena such as blade flying and excessive instantaneous current, which is a safety risk. Therefore, the researchers improved the wind turbine, using paddle control technology and an automatic control system to provide double protection for the equipment.

Wind turbine blades are also designed to be three-bladed in part for safe operation. From an aerodynamic point of view, more blades means more torque, so the rotation speed will be slower under the same wind speed. There is no doubt that the more wind energy is converted into electricity, the faster the wind turbines spin, the better. So it seems that the less blades the wind turbine is more efficient.

When the ambient wind speed exceeds the rated wind speed of the wind turbine, the wind turbine will automatically adjust the stability of the rotor speed. At the same time, the system can also control the status of the equipment according to the actual situation.

When the wind speed reaches 3 meters per second, the 1.5 megawatt wind turbine can increase the speed by turning the gear, thereby driving the generator to generate electricity. So can the fan blade speed increase infinitely with the increase of wind speed? When the wind speed exceeds the wind speed limit, the blade will stop working. The reason is that if the rotation speed is too fast, the eccentricity is greatly enhanced, and the inertial tendency will break the balance of attacking itself, and the blade will be easily broken.

Therefore, each type of blade has a maximum speed. When the wind speed is too fast, the speed limiting device in the background will stop the fan to reduce the damage and wear caused by its own inertia. Therefore, the fan blades rotate slowly, which can more effectively protect the aircraft from damage.