How to Choose a Car Inverter?

Car inverter is a device that can convert 12V or 24V DC energy from car battery into 220V or 110V AC power, which is the same as the grid power for household appliances. With the car inverter, you can connect the cigarette lighter or car storage batteries to run the electronics, appliances or various tools, which can greatly broaden the range of entertainment and work in the car. How to choose a right inverter for your car? Then, let's move on.

1. Which power rating is the best choice for car inverter?

According to the required load range, almost all car electrical products are marked with the required power. For instance, the car refrigerator is marked with 150W, and the power of a suitable inverter should be more than 150W. If multiple electric loads are used simultaneously in the vehicle, we need to add all the power of the loads together, and then choose a car inverter with greater power than the total power.

Pure sine wave power inverter can provide high-quality AC power which is the same as grid power and drive any kind of loads, but it requires high technical requirements and costs. However, modified sine wave power inverter can meet most of our electricity demands with high efficiency, low noise and favorable price. Therefore, modified sine wave car inverters are the mainstream products in the market. By the way, modified sine wave power inverters should avoid inductive load. Generally speaking, the inductive load refers to high-power electrical products produced by the principle of electromagnetic induction, such as motors, compressors and so on, which require a much larger start-up current (about 5-7 times) than the current required to maintain normal operation. In short, if you need an electrical equipment with large current start-up, pure sine wave inverter is your best choice. 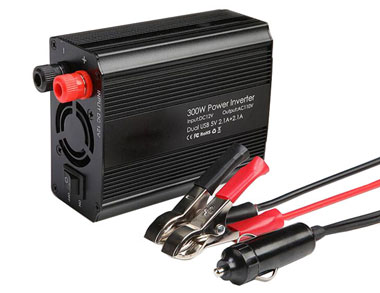 3. What is continuous power? What is peak power?

Basically, low-power (less than 150W) inverters on the market are made of aluminum alloy and PP fire-resistant plastics, because PP fire-resistant plastics can withstand high temperature over 150℃ without deformation. For 150W power and more, if no inferior components are used in car inverters, it is theoretically unnecessary to use fans but natural cooling for heat dissipation. In fact, many low-power car inverters on the market are equipped with fans to dissipate heat actively. Normally, the cooling fans in car inverters are intelligent, which will start only when inverters are loaded with electricity and reach a certain temperature.

So, what power of an inverter is suitable for car? Since there is a maximum allowable current in the design of car circuit, the maximum output power of most cars through the cigarette lighter interface is generally not more than 200W. It is recommended that the input power of car inverters through the cigarette lighter interface is not more than 200W. If you need to use high-power electrical equipment, you need to buy the inverter that can connect to the storage battery. Moreover, the car engine must be started when the high-power inverters are working. Most of the car built-in generators generate less than 1000W power. For the car inverters with more than 1000W power, if inverters work for a long time, it will cause the battery to lose power, because the power consumption is higher than the charging speed of the car generators for the batteries. If you often do it like this, you’d better replace your car’s own generator with a larger one.

In a word, an excellent car inverter should meet the following four requirements: