Full name of the micro inverter is micro solar on grid inverter. It generally refers to inverters with power below 1500W and module-level MPPT. It is mostly used in photovoltaic power generation systems. Micro is relatively small compared to traditional centralized inverters. The micro inverter inverts each component. Its advantage is that each component can be independently controlled by MPPT, which can greatly improve the overall efficiency. At the same time, micro inverter can also avoid the DC high voltage, poor light effect, and wooden barrel effect of the centralized inverter.

Micro inverters manage the collection of solar energy at the level of a single panel to improve the efficiency of the solar equipment, rather than working in the entire system like a central inverter. In the past, in order to ensure maximum power output during solar energy harvesting, the complex control mechanisms used increased costs and restricted the acceptance of micro-inverters. Complex and cost-effective IC and processor-based solutions can handle the logic control of micro inverter designs. Various voltage controllers and regulators also provide complementary solutions for solar panel DC output power generation.

In terms of function, the micro inverter is a DC/AC power source driven by the output of a solar panel. It relies on the familiar voltage converter topology to maximize power conversion efficiency. For the design of micro inverters, forward and flyback converters are still the most commonly used DC/DC conversion topologies. Silicon controlled rectifiers (SCR) or MOSFET full bridges are used to generate AC waveforms at the required grid frequency (shown as the following figure).

In a simple micro inverter design, the interleaved active clamp flyback inverter can increase the low-voltage DC voltage of the solar panel and the high-voltage AC waveform required by the power grid.

Just as the power supply design, micro inverter design requires various techniques to improve efficiency and reliability. It uses an interleaved flyback topology to help reduce the RMS ripple current through them to extend the life of the electrolytic capacitors in these designs. In addition, the application of active clamping technology can achieve a higher maximum duty cycle, allowing the use of higher turns ratios. This can significantly reduce the current stress on the primary side and the voltage stress on the secondary side. 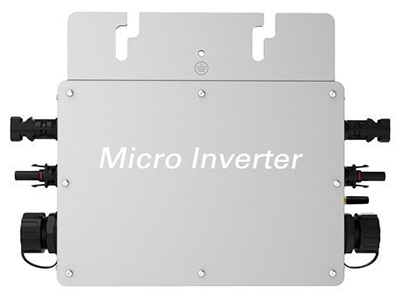 In order to ensure the maximum energy output, the converter must be able to respond to the control logic of the micro inverter. The logic is designed to maintain the converter voltage and current as much as possible to keep it consistent with the ideal characteristics produced by the MPPT algorithm. More importantly, a micro inverter connected to the grid needs to be able to disconnect itself from the grid during a power failure. In turn, these fault protection functions require the power converter to have at least overvoltage and undervoltage detection functions.

The design of micro inverters brings requirements for control, power conversion, and efficiency, limiting their widespread acceptance in the past. However, as the availability of integrated solutions increases, designers can use a variety of suitable equipment. Although a dedicated processor can provide the advanced control functions and MPPT functions required by the micro inverter, the design of the power conversion stage requires that the device can safely and efficiently provide the performance and functions required by the grid. Through a wide selection of available integrated switch controllers and PMICs, engineers can create efficient and economical power conversion stages in micro inverter designs.