In the solar PV grid tie system, the power of photovoltaic module is related to the inverter. The power matching between PV modules and solar grid tie inverters is not in a relationship of 1:1 fixed ratio, so it needs to be considered comprehensively based on the specific conditions of the project. The main influencing factors include irradiance, system loss, component installation angle, efficiency and life span of the on grid inverter, etc.

The output power of solar photovoltaic modules is related to irradiance. In areas with good solar energy resources, there are few clouds in sunny days, good air quality and high atmospheric transparency. The average solar radiation reaching the surface of the module is much higher than in regions with poor resources.

The higher the altitude, the smaller the weakening effect of the atmosphere on solar radiation. 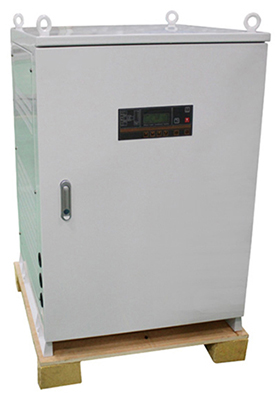 4. System efficiency (loss) on the DC side.

In the solar PV system, the energy radiates from the sun to the photovoltaic module s, and reaches the grid tie inverter through DC cables, combiner boxes, and DC power distribution. Energy is lost in all links. Due to different design schemes, such as centralized type, string type, distributed type, etc., the loss of the DC side is different.

Efficiency of solar grid tie inverters is not a constant value. What needs to be considered is power switching device loss and magnetic loss. At low power, the efficiency is relatively low. The efficiency is highest at 40% to 60% power. When the efficiency exceeds 60%, the efficiency gradually decreases. Therefore, the total PV power must be controlled between 40% and 60% of the on grid inverter power to obtain the best efficiency.

As an electronic product, the reliability of solar grid tie inverters has a lot to do with the operating temperature. If the temperature of components such as capacitors, fans, and relays is increased by 10℃, the failure rate may increase by more than 50%. However, operating temperature is related to power. According to statistics, the long-term operation of solar grid tie inverters at 80-100% power is about 20% lower than that of 40-60% power.

When the solar PV system calculates the system capacity according to the module capacity, the grid tie inverter should be selected according to the actual maximum power output by the module to avoid current limitation of the inverter. According to actual conditions, solar PV modules and on grid inverters can be configured from 0.9:1 to 1.4:1. When the AC output power of the installed inverter is used to calculate the system capacity, in order to increase the power generation as much as possible, the power of the components can be increased. Solar PV modules and grid tie inverters can be configured from 1.4:4 to 1.8:1, depending on how many components the inverter can connect.