Power Configuration for Grid Tie Inverter and PV Module -Wednesday, February 17, 2021
In the solar PV grid tie system, the power of photovoltaic module is related to the inverter. The power matching between PV modules and solar grid tie inverters is not in a relationship of 1:1 fixed ratio, so it needs to be considered comprehensively based on the specific conditions of the project. The main influencing factors include irradiance, system loss, component installation angle, efficiency and life span of the on grid inverter, etc.
Solar Grid Tie Inverter Working Principle -Wednesday, January 27, 2021
In addition to the DC-AC conversion function, the solar grid tie inverter shall also own the solar cell array MPPT function and various protection function. The solar cell array delivers power energy to the power grid through sine wave PWM inverter. The power sent from the solar on grid inverter to power grid is determined by the solar cell array power and local sunshine conditions of the specific time. Now, power inverter technology becomes very mature. The work principle: When the power supply of the utility grid is stopped, the grid side will stay in short-circuit status. At this time, the grid tie solar inverter will start self-production function because of the overload problem. When the overload situation is detected by the microprocessor, it will block the SPWM signal and will trigger the circuit breaker connected with the power grid. If the solar cell array can output energy, grid tie solar inverter will operate separately, which can be controlled easily. It only needs to know the negative feedback status of the AC voltage. The microprocessor will detect the output voltage of solar grid tie inverter and compare it with the reference voltage (normally is 220V). Then, it will control the PWM output duty cycle to realize inverting and stable-voltage operation.
Buy Grid Tie Inverter for Your Solar System -Tuesday, April 7, 2020
Grid tie system is a solar system incorporates solar panels, grid tie solar inverter and other components to convert sun light into usable AC electricity while your house/premises remain hooked up to the electric utility, consequently your house still be fed with electricity even after the sun light disappears at the night (from the electric utility), and at the day time, the solar system will take the responsibility!
How to Select a Right Grid Tie String Inverter? -Saturday, January 25, 2020
For large solar array you can use multiple string inverters and connect all together with one AC output for your loads. By using grid tie string inverters such way, you can make use of different tilt and azimuth angles that can be applied even for each sting, so getting maximum yield. In addition, increasing the solar array reliability as for example the shadow in one string panel will not affect the efficiency of other strings.
Difference between DC and AC Coupling for PV System -Tuesday, October 8, 2019
The light storage system includes solar energy components, controllers, solar inverters, batteries, loads and other equipment. At present, there are many technical routes, but the energy needs to be gathered on a certain point. At present, there are mainly two kinds of topological structures: DC coupling and AC coupling.
Solar Grid Tie Inverter Protection Function Introduction -Sunday, September 29, 2019
Input overvoltage protection: When the DC-side input voltage is higher than the maximum allowable DC array access voltage of the grid tie inverter, the inverter is not allowed to start or stop within 0.1s (in operation) and a warning signal is released at the same time. After the DC-side voltage is restored to the allowable working range of the inverter, the inverter should be started and operated normally.
How Does Input Voltage Affect a Grid-Tie Inverter? -Thursday, August 29, 2019
In the photovoltaic grid-tie inverter, there are many input voltage technical parameters: Maximum DC input voltage, MPPT operating voltage range, full-load voltage range, start-up voltage, rated input voltage and so on. These parameters have their own focus and all of them are useful.
How to Troubleshoot the Wrong Wired On Grid Inverter? -Wednesday, August 28, 2019
As to the photovoltaic grid-tie inverter, the input end is connected to the photovoltaic component and the output end is connected to the power grid. The component has only positive and negative poles, and it is not easy to wire incorrectly. Since the component is a certain distance away from the inverter, it is required to add an extension cable. The correct connection method is that the photovoltaic connector has a female connector on one side and a male connector on the other side, so that the positive and negative directions will not change. However, some green hands will also make the two connectors of the extension cable the same. If the power inverter is connected, the positive and negative poles will be reversed. 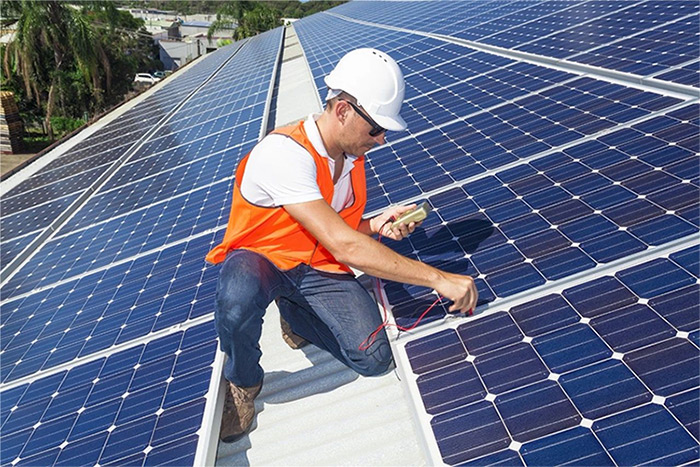