What is a Sine Wave Inverter?

As we all know, there are two kinds of electricity: one is direct current (DC), such as electricity from batteries and mobile phone chargers, and its waveform is a straight line; the other is alternating current (AC), which is 220V/110V for household use. The alternate means that its amplitude is periodic, with positive and negative changes. Sine wave is like a wave, rising and falling. Generally, the waveform of alternating current changes according to a sine function, so it is called a sine wave. The function of the sine wave inverter is to convert direct current (linear) into alternating current (sine wave).

The sine wave inverter converts DC power into AC power by controlling the on and off actions of semiconductor power switching devices (such as SCR, GTO, GTR, IGBT and power MOSFET, etc.). The circuit that controls the turn-on and turn-off of the power switch is the control circuit of the inverter. It outputs a certain voltage pulse to make the power switch in the power conversion circuit turn on and off according to a certain rule. At this time, output of the power main circuit is a specific harmonic combination, which will obtain the waveform through the filter circuit. The basic structure of sine wave inverter is shown on the following diagram.

The function of a sine wave inverter is to convert direct current into alternating current. It is composed of an inverter bridge, SPWM wave module, drive module and filter circuit. The SPWM inverter circuit is the key to pure sine wave generation. SPWM wave module generation has always been a research hotspot. SPWM is Sinusoidal Pulse Width Modulation, that is, a pulse waveform with a variable duty cycle and the PWM control technology is based on this conclusion. Perform control to the turn-on and turn-off of the semiconductor switching device, so that the output terminal will get a series of pulses with equal amplitude but unequal width. The desired waveform equivalently will be obtained by performing pulse width modulation. If the duty cycle of the pulse series is arranged according to the sine law, the output voltage can obtain a sine waveform after being filtered, and at the same time, the harmonic components in the load current are reduced. This is called sine wave pulse width modulation. 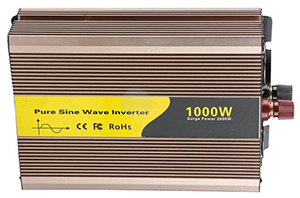 New energy sources such as solar and wind energy will become the main energy sources. Using photovoltaic cells made of semiconductor materials, these new energy sources are converted into various kinds of electrical energy through certain scientific and technological means. Sine wave inverter technology is one of the key technologies.

Effective management of harmonic pollution can not only improve the operation quality of electrical equipment and energy conservation, but also can affect the safety of civil power. By converting the main power to the city power standard after rectification using modern inverter technology, the harmonic pollution of the city power can be purified and the safety of electrical equipment and users can be protected. The sine wave inverter is an important part of the small wind power generation system, which is responsible for converting direct current into alternating current to supply power to the load.